There is, I’m told, a pseudo-intellectual argument among classical melomaniacs that not a single piece of music penned between Bach and Stravinsky is worth it’s salt. That discounts Mozart, Beethoven, Schubert (actually that I understand), Wagner, Rachmaninov… the list goes on. Its equivalent in cricket is the immortal adage: ‘Win the toss and bat’. Absolute tosh. We live in the ‘Modern’ era of the chase. But the music line was fed to me at the lunch interval by CPW Jonkers, so there’s no wonder its tosh.

ACME have returned to the fold after a brief absence from our fixture card and the season is much the better for it. They, like us, have been around since 1975 and colourful veteran of the V&A, Martin Bowden, has been a talisman in their number for many years. They boast the first mother/daughter cricketing duo to grace the field at Stonor, which I think we can all agree is a lovely testimony to how times change. Thankfully, they sat out of the earshot of Nicky during luncheon.

After some deft chicanery at the toss, it was decided that the V&A would bat first. The wicket is much improved, but after a brief shower an hour before the toss the prospect was a rather daunting one for Derewlany (2) and Constantine (9), the latter of the pair having been out on the tiles for a ‘Sten Do’ the night before. For those that are unfamiliar with the concept it is a modern one (there’s a theme building here…) whereby both men and women are allowed to attend the festivities in the hope that it brings a certain decency to proceedings. In fact, the opposite is the case, as this author can confirm.

The ACME openers, making the most of the conditions, challenged the bat with seam movement from both ends on a lively wicket. Constantine was out to a sharp yorker from Kethese, before the same had Derewlany brilliantly caught at the wicket by skipper Hoskins diving athletically to his right in front of the slip cordon. Tetlow (19) offered spirited resistance with Nieboer (42) before playing inside a straight one, leaving the V&A precariously perched at 36-3. Mounsey-Thear (35) steadied the ship with Nieboer with both riding their luck for a time. They opened up with some lusty blows adding 70-odd to the score before lunch was called.

Lunch was a jolly affair. Though absent, Steph Bird managed to pull together a marvellous offering of chicken pasta bake to feed the needy. Did Tom Bird forget to ask if there were vegetarians present? Yes. Did it matter? ‘Well, there’s lettuce, tomatoes and garlic bread! What more could you possibly want?’, came the reply (also from Nicky, who looks very fetching with a tea towel slung over his shoulder in the galley.) Frankly, it’s a miracle that the oven works at all. Held together by tin foil and little else, it resembles one of the props from Apollo 13 when they make the air purifier out of scrap. Bravo Steph! Bravo Nicky!

I mentioned previously that Martin Bowden wears/ has worn both V&A and ACME colours for many a year. Despite his absence, this makes him fair game for one of Nicky’s lunchtime gags. In a match report from the depths of the past, Nicky suggested that Martin had ‘enjoyed some Lebanese substances’ during the course of a game. Martin appears to have taken umbrage and remonstrated with our Dear Leader that he’d have Old Bill knocking on his door… at this point, Nicky suggested he offer them a Tagine to go with their dope. Somehow, they remain friends.

With some lethargy apparent on both sides, the game resumed. The V&A collapsed, beginning with CMT’s stumping and ending with Goodliffe (0) out caught with a boundary or two in between. The total to chase was 159.

The V&A began well with the stalwart Nieboer charging in down the hill. The first ball hit a crack and reared off a good length in the direction of the slip cordon, narrowly evading the edge of Hoskins’ (78) bat. Game on. Alas, the edge continued to elude both bowler and slippers alike. Then the sun came out. Oh dear. Horan bowled accurately up the hill after a slightly wayward start. Tetlow, usually fast (if slightly wayward) was unable to bowl due to ‘an injury’ sustained whilst out courting the night before. Many of the V&A keep themselves nice on a Friday night. Joe rarely does.

Despite both pace and hostility from both ends, the ACME pair doggedly saw off the opening bowlers and looked well placed at 51-0. Enter ‘Big Nick’ Derewlany, with a score or two to settle. He dismissed Sarma (10) LBW when he got one to crash into the pad. Was it going over leg stump? It looked like it from first slip. But that is the joy of cricket. In his next over he had Vathson (5) bowled and all of a sudden, there was a game on. However, Kethese (21) ably assisted Hoskins and the runs kept coming at a comfortable rate. Jonkers, Mounsey-Thear and Taylor all bowled well and were unlucky to have some chances missed. Despite a last burst from Nieboer that saw him bounce out Hoskins, finally, there were not enough runs on the board and ACME got home with three overs to spare.

We repaired to The Rainbow, where a startled Curly actually flashed a smile at one or two of us for a change. This remains the highlight of my day. The smile, you understand, rather than the booze. Although, on second thought… 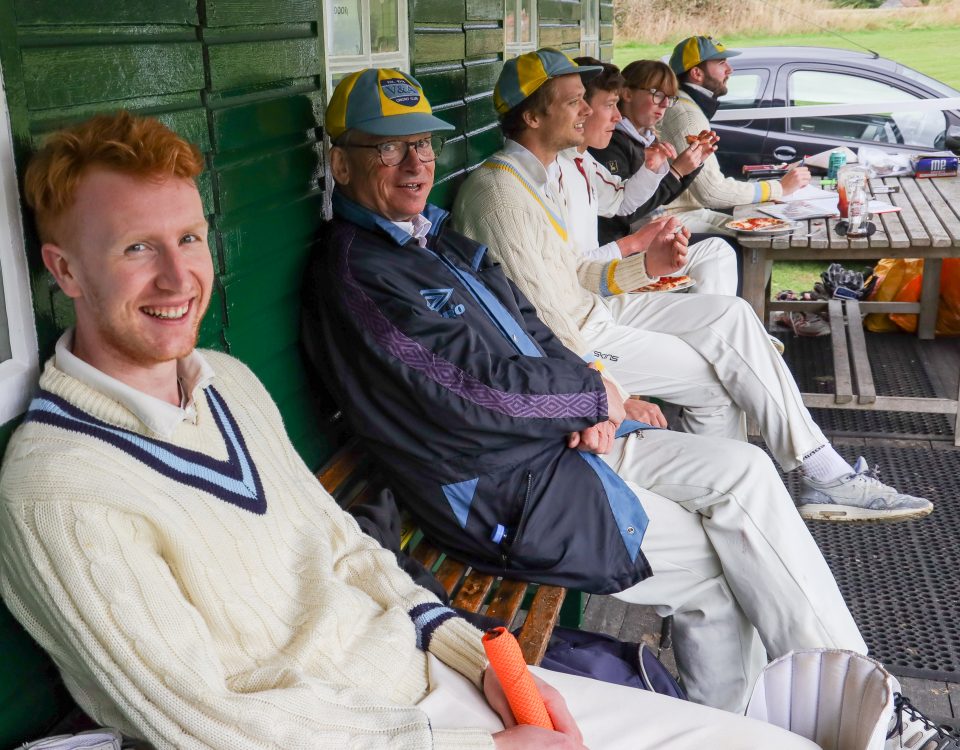