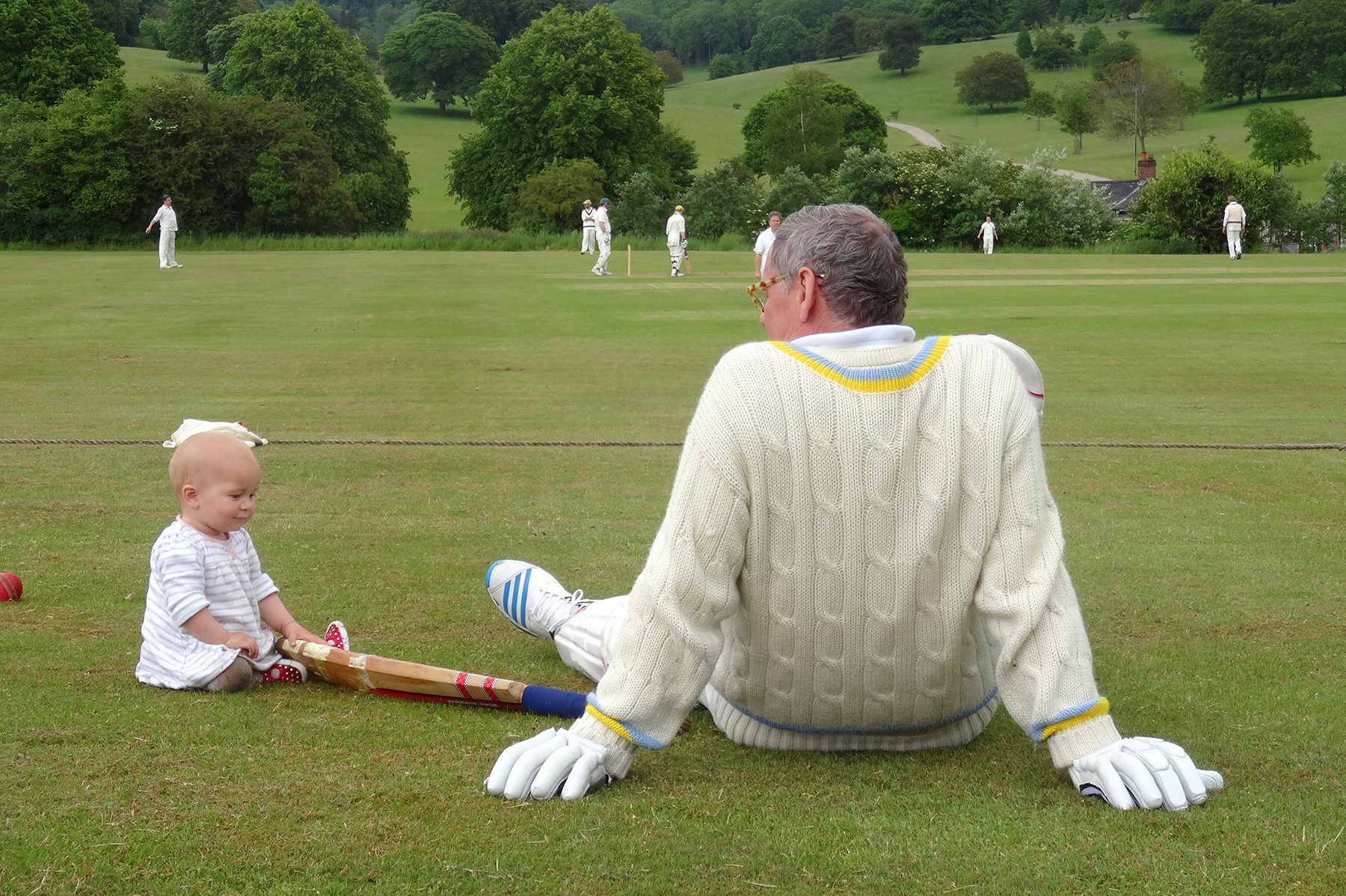 Unlike the V&A CC, whose members nowadays have little to do with the V&A (although some have visited the museum by accident), The Authors XI are actually authors (alumni include P.G. Wodehouse and Conan Doyle). Currently they include Tom Holland, the popular classicist, and Andy Zaltzman, the comedian and podcaster (also a fine batsman). Tom Bird chatted to him, not entirely aware of his pedigree. ‘What do you do?’ ‘I have a podcast, The Bugle.’ ‘Been doing it long?’ ‘Ten years.’ My daughters, who went to the circus in Stonor Park that was noisily in evidence all day Saturday, squeaked with excitement on hearing Andy was in spitting distance. If only they’d known.

I have a family connection with The Authors. William Fiennes is a regular. He was raised at beautiful Broughton Castle near Banbury, about which he wrote so movingly in The Music Room (2009). His Dad is Nat Fiennes (Lord Saye and Sele) who saved my father’s life in 1944, on the road to Arnhem. My father had been blown up by mortar fire, and was assumed to be dead (he looked it) but Nat threw smoke grenades and dragged him back to safety. They have been chums ever since. Although the Fiennes are descended from the founder of Winchester College and could have gone there for free, both father and son went to Eton for some reason; maybe they didn’t have the Latin, or nicked someone’s tuck or something. Eton has never been too fussy about its intake. Captain Hook went there, so did Guy Burgess and Bertie Wooster. Incidentally, Jago told me that at school he was forbidden to play conkers because it was dangerous. In the 50s real boys pulled the wings off flies, baked conkers to make them hard and flicked ink pellets at masters. Jago did none of these, probably made lace doilies; but he’s quite butch in the field.

Dennis de Caires was skip (see photo above of Dennis discussing Cézanne with a spectator). Unforecast rain doused the spirits when we (eventually) arrived so lunch was taken early. I catered. Lunch was a selection of meats and salads, and Spaghetti al Pomodoro. We also saw the Return of the Brie. My rudeness about Sarah Jenkins’ filthy paté resulted in her withdrawing Brie and providing industrial cheddar instead. Christiaan protested so I went to immense trouble to source a fine Brie from France and have it flown in. ‘I’ve gone off the idea’ said Jonkers, on seeing the luscious cheese. ‘I hope you fucking choke on the spaghetti’, I muttered politely.

Dennis won the toss and invited The Authors to bat first, on a damp wicket. ‘I am pleased to say,’ he told the dressing room, ‘that they have graciously accepted the invitation.’ We did not have a huddle but I noted the opposition, when they fielded, did. What do people say when this vulgar charade takes place? The Authors’ skipper, Charlie Campbell, says they mostly talk of royalties. Incidentally, Charlie, a famous literary agent who once worked for the ferocious Ed Victor, is a chronicler of cricket at our level and has written a book (Herding Cats: The Art of Amateur Captaincy) in which one of us is subtly satirised. Guess who?

Our invitation to let them bat did not go entirely to plan. Although Jonkers bowled their opener for 11, and Charlie ran himself out underestimating Jago’s fantastic arm from the deep, Andy and Hogg (No. 4) soon started thwacking the ball to all boundaries. Jacot bowled too full and was punished. Dennis unselfishly bowled at both ends, trying to stem the flood but only Jonkers was economical. Sam Baker, a young virile all-rounder who plays league cricket, then suffered the curse of Stonor, twisting his ankle in a wretched rabbit hole. He struggled on with pain killers and ice, and even turned his arm later. After a century partnership Phil, a wizard behind the sticks, stumped Andy (the umpire’s decision might have been different if Andy hadn’t scored 59), and the wounded Sam caught Hogg (71) off Tom P-G in the slips. Sam bowled Kimber (No. 5) for 2, and Tom P-G bowled Cornick (No. 6) for a duck. But The Authors continued to pile on the runs until another brilliant stumping off Jonkers, and a nice Jonkers caught and bowled, ended the run fest. Our fielding was ok(ish) but there were dropped catches (by our yoof element) and one comic fumble by Jonkers on the boundary that was probably the result of too much Chateau Batailley on Friday night. Strangely Tom P-G had no hangover so there must be something wrong with his gut or bank balance.

An over of Henry Turpie’s that went for 18 (all at cow corner) made the wrong sort of difference. They scored 188 in their 35 overs. We were short 6 regulars, including some strike bowlers, so didn’t do too badly to restrict them to under 200. Someone pointed out, tactfully, that I am a liability anywhere near a cricket pitch. I am about to spend the gold reserves on my knees. This same rude fucker said ‘don’t bother’. And added that I was about as useful as anyone who cannot run, throw or bend. He then opined, on a related topic, that there are two types of bore, the club bore (passive) and the pub bore (active). The club bore sits in the saloon smelling of wee wee, doing the Telegraph crossword. The pub bore accosts you with his beer mat trick. I like to think that my card tricks qualify me as an active bore.

We opened with Jago and Sam Baker, who were brilliant. Off decent bowling they scored at the required rate, executing an array of classical shots with perfect timing to all corners. Sam was clearly hampered by his ankle but gamely ran quick singles. We took tea with 100 on the board. Things looked rosy. Tea was entirely adequate, provided by Adam. He has been with his lovely Emma to Lake Como and Venice. Just after I’d stayed there. I realise he is stalking me but apparently there is nothing legally I can do. Dennis was just back from Paris and the Cézanne portrait show at the d’Orsay (coming to the NPG soon). We discussed popular taste in art. Top ten artists include (in order) Van Gogh, Monet, Matisse, Picasso, Munch, Leonardo, Klimt, Hockney. And at No. 1? Jack Vettriano.  Dennis guessed. Never overestimate public taste.

After tea, as happens, things fell apart. When Jago had scored 50 (pity his parents weren’t there) he went for a heave and was stumped; then Sam was caught (spectacularly) at long on for 46. Henry Turpie was going well but unwisely attacked a wide ball and was caught behind. We were falling behind the run rate. Adam came in and hit a few but was out of sorts and was stumped for 8. Dennis stuttered at first but then showed some fluency, and with Jonkers, looked to make the target reachable. But Jonkers skied one and was caught, leaving Emley, the specialist No. 7, to try to win the match with his skipper. They needed 31 off two overs. It looked hopeless. But Dennis smacked successive boundaries in the penultimate over leaving 17 to get in the last. First ball they scampered for a single, then ran two, then a single. Leaving 13 to get off three balls. With Dennis facing. Deathly hush. A boundary was needed. But Dennis played and missed and it was all over unless a wide or no-ball was bowled, The Authors did not oblige and we were short in the end by 11 runs.

But what a good day. Nice to have brainy opposition, where I can natter to square leg umpire about copyright and intellectual property. We agreed best career move is being dead. Elvis and Marilyn earn much more dead than alive.

As I tidied the kitchen we discussed Dumb Britain, where most people think the Kaiser is a pop group and Rasputin a pop song. Henley Festival used to feature Beethoven. Now it’s Little Jimmy Osmond. And then there’s the rudeness. The Tea Lady and I went to the Flower Pot pub, over the bridge at Henley and left to the little village of Aston. Full of stuffed birds and fish, and a grey parrot called Charlie that one feeds at one’s peril ‘cos he bites your fingers. I told Mine Host the V&A might like to drink at his pub, that we used to drink at Curley’s Rainbow Inn but he was the rudest landlord in Oxfordshire. I turned to leave. ‘Fuck off four-eyes!’ I heard. Rude sod, I thought, ruder than Curley. But it was the parrot. However, he had learned his language from the landlord, the self-confessed rudest landlord in Berks. So we drink at The Golden Ball, where we get free chips instead of free abuse.