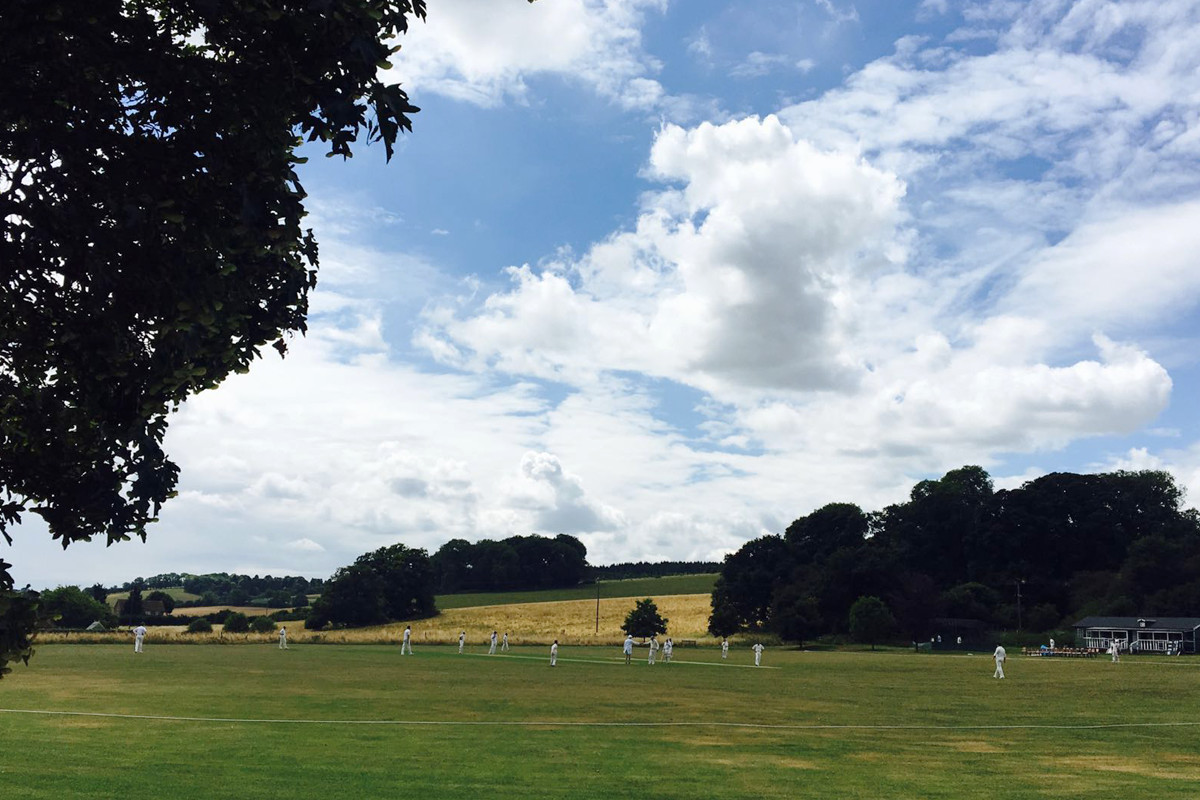 The local derby has a special place in all sport. They are the games that players play for and spectators most relish throughout a season. Bragging rights are on the line and matches can see the odd moment of tension between players. It is rare however that drama and conflict between teams starts before a ball has been bowled – or even before anyone had popped their whites on – but so it was this Saturday when we hosted Turville Heath CC. Andy Taylor had done a fine job of doing the prematch admin for the game to help the caterers (the M-Ts and the Ashcroft) out but only a couple of days before the game a member of Turville undertook a strange kind of village cricket form of blackmail on Andy, saying that he would only play a time game and if we stuck to our usual limited overs affair he would pull the fixture and we would need to find another team at very short notice…fully in the knowledge that no skipper wants to go through the rigmarole of finding another oppo at short notice. Wanting to give the Turville representative the benefit of the doubt, Andy said that he was sure that would be possible and breathed a sigh of relief when the threat of a second weekend in a row without cricket was abated.

However, whilst Chris MT had his catering hat on, offering coffees and a rectangular ‘Aldi-esq’ version of jaffa cakes to home and opposition players alike – he was also the on-pitch captain for the game and was duly brought up to speed on the nature of the pre match negotiations. Unimpressed, by both the manner of the negotiations and the fact that they were happening at all the skip tested the water on sticking to a limited over match. There is tried and tested reason why we mainly play 35 over games at the V&A – it works, it has worked for a while, and there was no good reason for it not to work this Saturday…plus the captain had been instrumental in the design of the luncheon menu – three cheeses and chutney were on offer and he wanted to ensure there was ample time to enjoy them with an ale or two!

So, MT and the Turville Heath match captain (who himself had not been privvy to the behind the scenes email chatter – the very amiable and excellent all-rounder Mr Hunt, along with his 9 year old son Charlie…more about him later) walked out to the middle where a dry and hard deck was on offer, and having called correctly the V&A found themselves batting first against the local rivals. The hullaballoo had not died down there though, as the Turville keeper (who it became apparent was the pre match aggressor) threw his toys out of the proverbial pram and threatened to storm off and not play the game having heard it was to be a friendly and gentile 35 overs a side affair. This led to the Turville skipper spending ten minutes talking the keeper into playing. Given the positive and friendly nature of the current touring Pakistan team – it was good to know that somewhere in these Isles cricket hasn’t lost it’s edge!

Anyway, at just before midday the game commenced with Ross and Rob T marching purposefully to the middle. Their reward for opening up was Hunt Snr charging in from the top end, wind-assisted and bowling off his ‘other’ foot akin to the great Mike Proctor in his prime. Supported by the accurate and very capable Vallance at the other end, batting (even on a decent strip) was far from easy with Ross and our number three Andy T both being clean bowled by absolute beauties. Rob struck some lusty blows and is beginning to look like his past V&A batting form is returning to him (which bodes well for the rest of the season) but was caught out for 19 and we found ourselves three down for 28 quite quickly. So came together two kindred spirits in Adam Chataway (on a visit to the V&A from the Jesmond Jags) and Nick Emley to shore things up for a bit and take the bite out of the bowling. It was in this period however that the skipper’s decision to not take advantage of a declaration match began to come unstuck. One of the disadvantages of rebuilding an innings is that one inevitably takes a more cautious approach to batting and despite some well run singles the V&A got past fifty at the half way stage when Nick was unfortunately bowled by a good-un.

So came the skip (who was persuaded, by friendly mutiny) to jump up the order to try to hit a few boundaries and get the score moving a bit. Free of the pre-innings nerves that can wreak havoc with a batsman as he is waiting to go in – as he was halfway through slicing a gala pie for luncheon – CMT joined Chataway to see the V&A through to lunch on 85 for 4 after 23 overs.

Despite the pre match tension – luncheon was a fun fifty mins and great thanks goes to Lisa MT and Megan A for a superb spread that was wholeheartedly enjoyed by all. The sun was winning its battle with the clouds and a picture perfect setting reminded us why we play this wonderful game and why we choose to do so in Stonor.

Resuming after lunch and having chosen to resist a third slice of brie, Chris and Adam set about the Turville bowling with renewed relish. Chris often finds that his style of play irks some opposition – cries of ‘slogger’ and ‘he’s only got one shot’ have followed his career since university, and did so again this match by the ever cheerful keeper – but his motto is that if one is faced by a continual stream of half trackers on middle stump they will continue to be dispatched in front of square on the leg side until the bowler decides otherwise. This was duly the case against most of the seamers for the rest of the innings.

This barrage over square leg – intermingled with more stylish and delicate off side play from Chataway – was only interrupted by the Turville captain’s nine year old son Charlie, who bowled some of the best leg spin seen at Stonor for over a decade at least. Charlie is a first rate and smiley young chap and one can see why, when he is spinning his leg breaks almost square in very good areas and has a throw on him that would shame half the V&A. I have already been out to Mr W Hill and popped a bit of money on young Charlie playing for England one day and I would strongly advise you all do the same – I look forward to watching his career develop over the next ten years!

Anyway, as the innings came to a close in the final few overs, wickets fell steadily as the V&A looked to hit out lustily against the returning opening bowlers and a score of 194 from our 35 overs felt very competitive. Chataway ended with 44 and skip managed to rack up a ninety not out much to the chagrin apparently of the Turville scorer.

After a quick change of innings the V&A started tidily with the ball as the Andys – Jones and Taylor – charged in hitting good lengths, taking a wicket a piece and restricting the Turville top order to just 21 from the opening eight overs. The man who can bowl almost anything – our own bowling version of Gary Sobers – Tom PG then sauntered in with the seam up and bowled a very tidy five overs with little wicket taking luck but helped to keep the pressure on the batsmen. Rob Taylor’s tweak was also impressive on a good batting wicket but something different was needed to help break an increasingly confident partnership between Turville’s number three (Wade) and four (Hunt Snr) who had put on over eighty either side of tea (which was excellent thanks to some homemade scones by Jane enhanced with a few more strongly worded exchanges between Andy T and a Turville umpire who doesn’t like to respond to an appeal nor likes to inform the bowler why he turned down an lbw even less…the modern style of umpiring has not yet made itself to the Oxfordshire county border it seems!).   And so it was that A. Jacot answered the captain’s call after tea and in a very Botham-esq spell had the dangerman caught on the boundary cooly by Rob T from a full toss and then clean bowled their number five soon afterwards with a good length ball that nipped back.

With the tail exposed, the V&A enjoyed a rather pleasant final few overs in the field (Nick Emley taking a fine catch in gully off Andy T) safe in the knowledge that the run rate was ever increasing and the game slipping away from the opposition – two Hunts but no hoorah, careful how you say that – the sun was out, Stonor Park looked impressive and the V&A had another good win to their name.

Massive thanks to the caterers, Lisa, Megan and Jane and for Rupert doing a sterling job umpiring for 35 overs straight through. 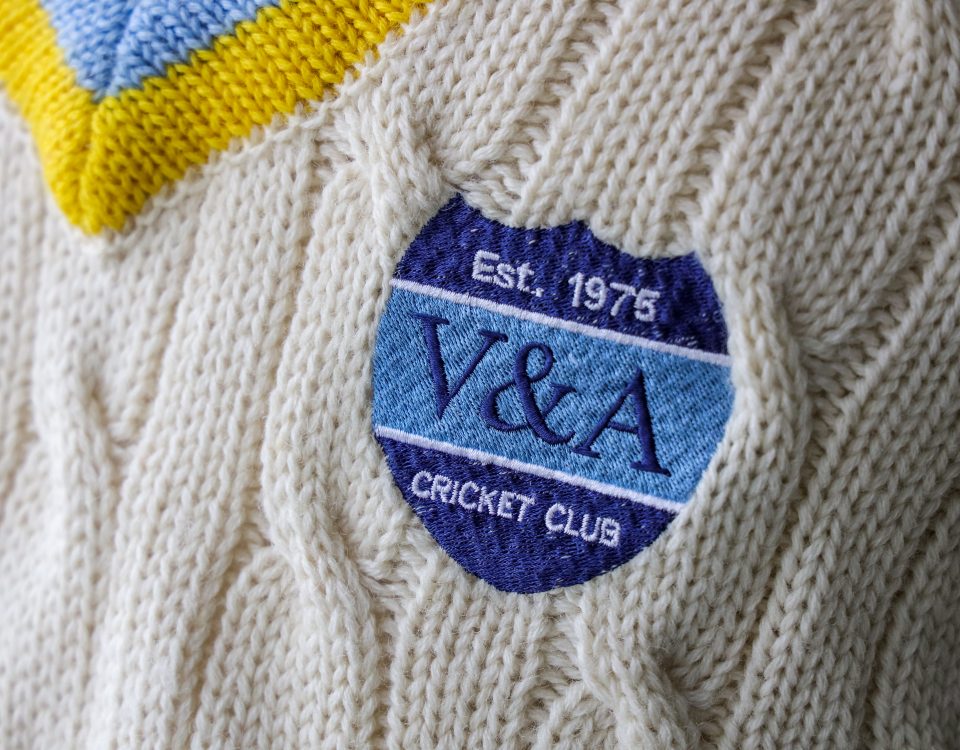