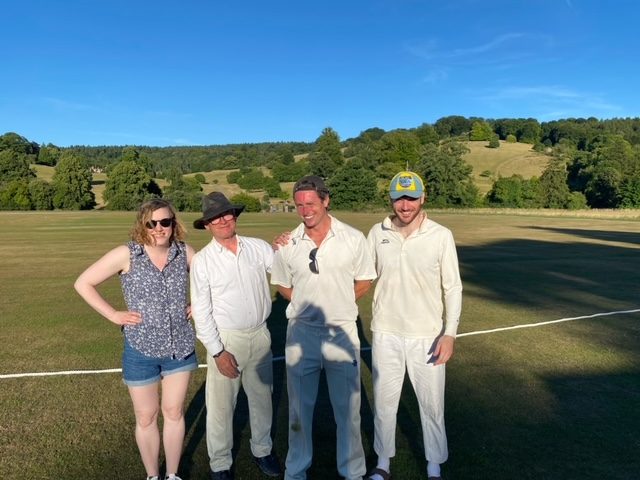 We hosted the esteemed Therberton’s this week, run by Tim Young QC. We’ve been playing the “Thebs” (not to be confused with Thots, who Joe has acquainted himself with in Valencia) for 35 years and is often a tantalising fixture. The Thebs are pure class – their skipper, Paddy, was reeking with enthusiasm on email as we discussed the game midweek, and the team helped to clear the tables and stack the dishwasher (much to the delight of Steph Bird, who I had begged Tom to rope in for a second week in a row of catering). Steph, again, thank you, you’ve earned a well-deserved break.

Fresh from my success playing two-up down under last year (an Australian gambling game involving a coin), I won the toss and opted to bat on a scorcher of a morning. The UK is apparently in the middle of a “high pressure heat dome” at the moment. I’m convinced they’re referring to a spinning day 5 wicket in Pune in peak summer, but the point stands – it was delicious out there.

Wright (0) and Bird (0) opened up for the V&A. Steph, filling Tom with confidence as he headed out to the middle, asked incredulously “what are you doing??” as he put his pads on. Two stroke players on the day, the aim was to replicate England’s recent “Baz ball” and get us off to a flyer.

A flyer is one way to put it. Matt was bowled first ball and Tom caught for 0 off a leaning edge as the Thebs started strongly, with Jenner (2/24) and Rodd (5/27) bowling well with guise. Jenner in particular got a few to tickle the middle of the pitch & spit off a length past the gloves. At 14/2 on a flat wicket and fast outfield, we were in trouble.

Enter Marsh and Derewlany. Self-coined as the “run car” (much to the chagrin of Tetlow et al), the two have been in imperious form this year, flying down the M40 in Marsh’s Dad’s Jaguar (compensating for something clearly) & plundering opposition attacks into the recently-manicured bushes around Stonor. Lachlan, also compensating for something, was shocked as he was told he was batting no.6 after a fantastic 75* last week opening the batting. After not winning any awards last season, Lachlan was keen to show these millennials what he was made of, and complained so voraciously that he was moved to 5.

But it made no difference. After another marvellous spread from Steph Bird & an endearing speech from Tim Young QC (can’t remember what Nicky said but that’s probably a good thing, although he informed us that we’d dropped Boris Johnson from the club), Marsh (91 off 68) and Derewlany (94 off 75) took the attack to the Thebs and turned the innings on its head. Marsh, the more fluid of the two, reached 50 in 38 balls with some sumptuous strokeplay. Derewlany, as has been custom this year, was dropped on around 20 and made the visitors pay, eventually finding his groove. Between them, about 4 balls were lost into the hedges around Stonor. By the time both were out – both gunned LBW by Tom Gurlerson, a fellow V&A player (apparently), in the 90’s – the score was an imposing 221/4. Lachlan (39*), with the bit between his teeth and a point to prove, finished the innings strongly for a bowler with some classy strokeplay as wickets tumbled around him. Christiaan (0) and Winters (0) were gunned too, this time by the captain (both as plumb as it gets according to him, not to them – he was substituted as umpire not long after). The V&A finished 271/8 off their 40 overs.

We put the pressure on early. An aggressive field was set, with a short leg just backward of square. And it paid immediate dividends, with Tom Bird nabbing a spider-esque chance to stop the ball and run out their opener. 0 runs. 0/1. That’s pressure. Nieboer (staking his claim for bowler of the year) bowled well, taking 2/15 off 6, and was backed up well by Barnaby Winters, who bowled accurately with inswing.

But as has been so often the case this year batting second at Stonor, the pitch baked like a dusty knuckle sourdough in the afternoon heat and became bone dry. The outfield became quicker. And the Thebs began to counterattack, with Aldridge (61) and Sutton (58) leading the charge despite some tidy bowling from Christiaan and Jacot. They were watchful but capitalized on the loose ball, taking advantage of a V&A team full of scones and banana bread (tea was sensational Steph!). The field was spread. The game was drifting. Something needed to change.

Enter Marsh (1/25). Christiaan has referred to his off-spin as “complete rubbish”. I think that’s unfair. It’s moderately average, but not terrible. I’d begged him to bowl off-spin given our seam-heavy attack, and he obliged, trundling in like Chris Gayle bowling darts. He built pressure from one end despite the occasional full toss, and knocked over Aldrigde as the latter looked to up the ante. The late Keith Miller Esq. MBE would argue “Pressure is a Messerschmitt up your arse. Pressure is not playing cricket”. But 9 an over with the field spread against quick off-spin would disagree. Sutton was calamitously run out soon after, before Derewlany (2/4) bowled some reasonable medium pace. The period had broken the back of the innings, and despite some lusty hitting from Rod (28*) against the indomitable Winters Jnr, the Thebs finished well short on 225.

It was peak summer at Stonor. Marsh revved his Dad’s Jaguar again. The Assendon Strangler, Derewlany, Nieboer and Marsh told the oppo to go to the Golden Ball but it was shut so buggered off (apparently beers were shared at Curly’s pub down the road). It was a great fixture (as always) against a great oppo. Christiaan went back to his bookshop to find Tom Grulerson a copy of “Wisden’s Laws of Cricket” so he knows for next time that high and leg side does not mean out. No doubt Christiaan and Winters Snr feel like I should borrow a copy too. 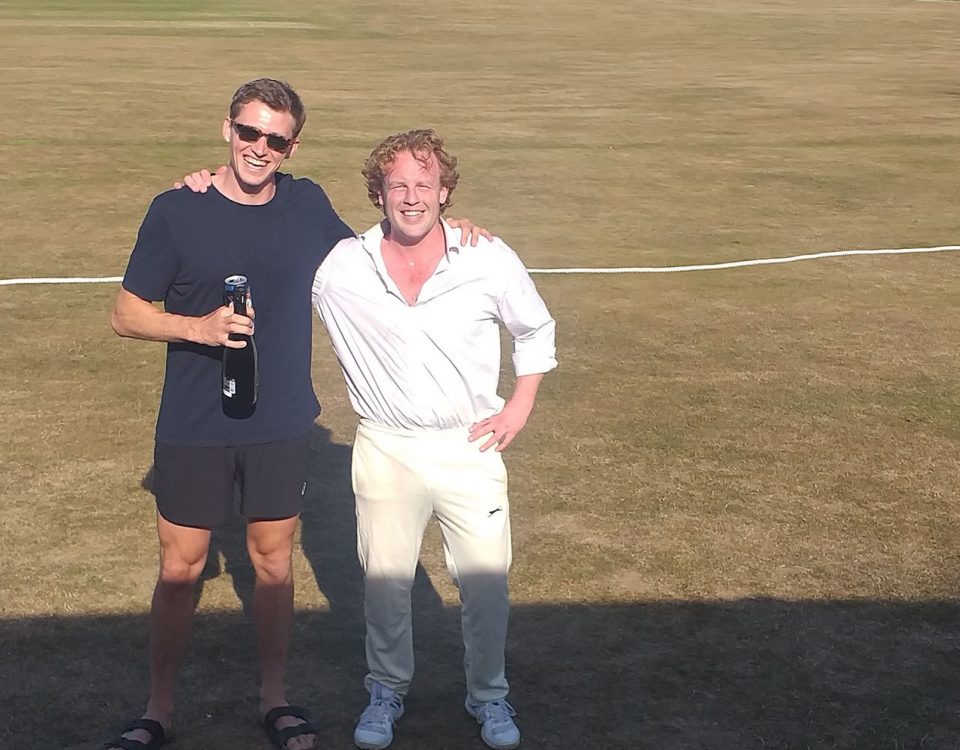 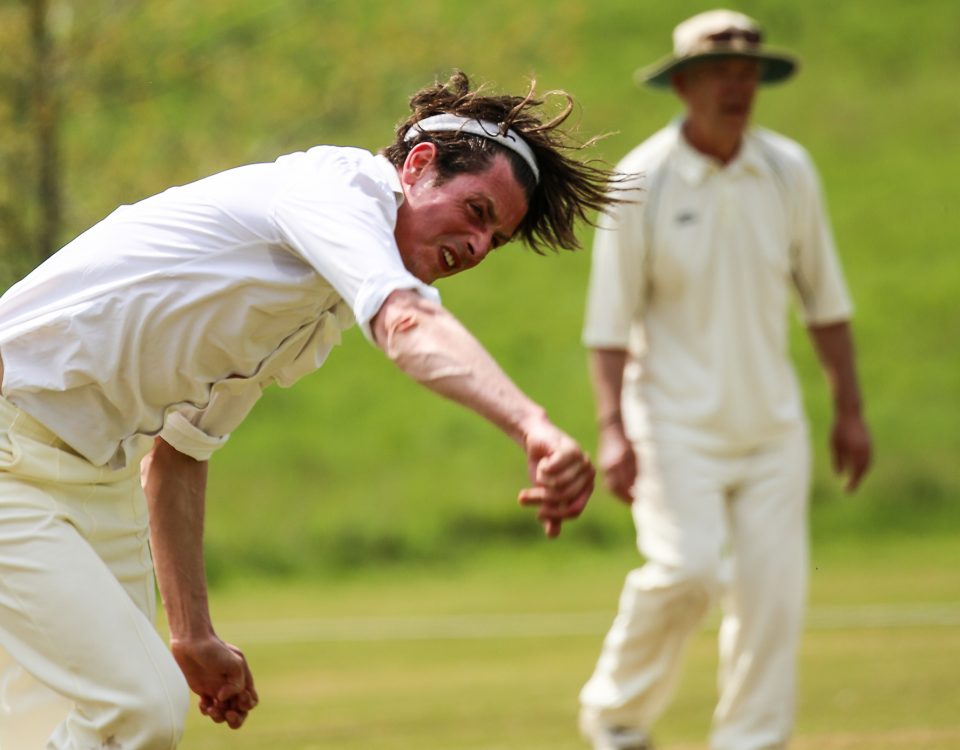