PRESIDENT OF THE V&A CRICKET CLUB 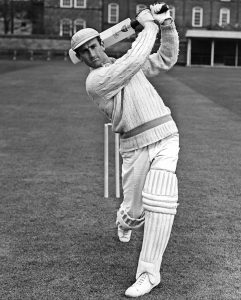 He became President around 1978. He lived down the road from me in Ealing, and was a friend of Simon Foster’s family, who was then one of our finest all-rounders. I wrote to Ted who said he’d be delighted to grace our club as President, but to remember to include his CBE in the credit. I used to see him locally and wave to him and he always waved back but with a slight air of not knowing who I was. When Andy Fraser and I met him at the Hilton 20 years ago (at a function in honour of Garry Sobers) we said hullo and mentioned the V&A, and showed him a V&A scorecard. I had hoped he’d say that being our President was his proudest achievement, but he seemed not to remember anything about our invitation or even the V&A. Perhaps his mind was going. He had a lovely ex-model wife, Susan, top-of-the-range Andy thought, but he had enjoyed a large Grouse or two.

We wanted Ted because he was a) a brilliant batsman and b) carefree. When he started commuting to Hove on the Brighton Belle from his nice Pimlico pad he said ‘life felt pretty good. It was better than being in the army, that was for sure.’

He was known as ‘Lord’ Ted at Cambridge because of his patrician, effortless talent and manner. I saw him at Lords in 1963 counter-attacking against Hall and Griffith, scoring a thrilling 70 in as many minutes, hitting with awesome power (while Barrington stood firm the other end). The ancient Frank Wooley was sitting near us, blind I recall, but seeming to hear the pyrotechnics.

When skipper he occasionally seemed bored, in a languid Goweresque fashion, and would practice his golf swing at mid-off. Like our Hon Vice Pres, the late Keith Miller, he loved the gee-gees and it was a trip back from Newbury that was his cricketing downfall. He had overdone the fizzy stuff and didn’t look at the petrol gauge. He ran out of gas a mile from home and tried to push the car off the road but buggered his leg badly. However, a few years later Cowdrey, England’s skip, rang him to say England’s injuries meant Ted was needed and would he have a couple of county games before joining England in the West Indies. So, after several years of no cricket, Ted played for Susses against Kent and ‘Deadly’ Derek Underwood – ‘not much of a bowler’, said Ted (!) – and scored 200.

He once stood for parliament against Jim Callaghan and didn’t do his chances much good by saying you could tell Labour supporters by their dirty milk bottles and filthy curtains. He became a selector, a journalist and articulate commentator who also changed the stats and graphics side of TV coverage. When I last saw him he was living in the South of France and liked the sun, the golf and the wine. I asked him whether he would come out of retirement and play for us (he was much younger then than I am now). ‘Sorry, who are you again?’ he enquired with rare wit.

Dexter was an accomplished pilot, a biker, a (dreadful) novelist, a raconteur; and in his own words – an ‘International Sportsman and jolly good egg.’