Nick Birdy (above, headless) holding the 2006 Fixture Card with its cover featuring Sir Garry Sobers, who is seated with Ted Dexter at a Hilton Hotel function. Ted seemed a bit confused and didn’t recall his status as our President, but it was late and the evening had been convivial.

Our season was mixed – lows, troughs, nadirs and some moments of light relief.

The best was superlative batting by Ollie Marsh (and others), but Ollie was a class apart, possibly the best V&A batsman (not forgetting Baz Street) since Robbie Lawson and Vib Fonseka (who, like Nick Emley, fell out with Old Bill and spent time slopping out). The pitch behaved a bit differently this year, no one scored a ton; there were several last year, even in a truncated season. But Phil Goodliffe’s horticultural expertise is a great boon.

We had some brilliant games; but it’s strange how when we have our best possible team out…we fuck up. Yet we are a far cry from the old guard of me and Rupert Morris et al. What Rupert’s batting lacked in technique it made up for in brevity. He was a bit of a girly in the field (which is possibly unfair to girlies). But he caught a catch in 2004. Old men wept. Annette Jacot, Adam’s dear old mum, exclaimed ‘Fuck me!’ Rupert’s missus, Kitty, said ‘what happened?’ She was busy knitting when this once-in-a-lifetime occasion occurred.

The most miraculous catering was Chris Mounsey-Thear and Christiaan Jonkers’ luncheon following a mercy dash to Waitrose in Henley. I told the Woosterish Jonkers on the phone not to forget the Typhoo. ‘What’s that?’ he asked.

There was a cock-up this year over Kensington CC, a very nice team of friends. Chris Mounsey-Thear, our fastidious Fixtures Sec, emailed me that they had cancelled at the last minute… to which I replied that we didn’t need to play them again, one strike and you’re out. I may, however, have used intemperate language. Unfortunately, he or I had copied Kensington. Their Chairman was a mite displeased; or – to put it another way – very VERY displeased. In pathetic mitigation I claimed I had mistaken them for some other fuckers.

We have played, in the main, pleasant teams, none more agreeable than Stonor CC, our hosts, who lose with grace. We were tactless this year and won the annual Stonor CC Quiz, compiled by that fount of wit and useless knowledge, John Powell. I say ‘tactless’ because our instruction is to come second; put up a spirited show but not look like a lot of poncey smartarses and piss on them. Unfortunately, the team of Ayling, Jonkers, Grantham, Bird N, and N P-G couldn’t or wouldn’t hide their erudition. A few more questions about Telly Tubbies would have sunk us.

The V&A is an ecumenical team. We like to play all sorts, not just the arty scions of the Chelsea Arts Club, with their raffish President, Henry Blofeld, who outtalked me and outWoostered Jonkers.

We played one side who did not get my story about Raphael, because its punchline only made sense if you knew he was an artist not a Ninja Turtle. One bloke from the same team told me how their retiring Chairman was given a book and said – ‘No thanks, I’ve already got one.’

Strangely, Jonkers this season did not shout at anyone, perhaps not having Greg Wise as a target. [Greg may yet become the first V&A player to win ‘Strictly’.] There is a story told about Jonkers, which he confirms is probably true:

A batsman, Terry Blake of the Hermits, was having a bad time on a scorching day. He played and missed every ball from Jonkers’ bowling and became flustered. ‘Phew,’ said Terry – ‘What couldn’t I do with a pint of Breakspear’s.’

‘HIT IT WITH YOUR BAT!’ said Jonkers.

Martin suggested that my match reports veer towards the libellous, with veiled accusations of substance abuse etc. I dispute the ‘veiled’ bit.

When I said that Lachlan was ‘not all there’ I meant he was in France.

By the way, Sarah Jenkins’ yapping dachshund Brecon spent several afternoons shagging my left leg, again. This is a minor miracle, as he’s been castrated. What upset me was that he went off after tea with Lachlan, who’s spoilt for choice, and doesn’t need another fan, particularly a runt like Brecon.

Rumours persisted that my missus is an invention. You would not think so if you bust her Bullworker like I did the other day. She is also displeased ‘cos I cheated (by mistake) at online bridge and have been banned. Now she plays with a robot. I gather he’s more shit scared of her than me. Incidentally, she turned up for a game in 1987 when I scored 89 off 23 balls. Going home in the car she said ‘is it normally that boring’ and never returned.

At the annual AGM at Leander it was announced by Prof Dennis de Caires that Michael Atherton OBE had been asked to replace the late Ted Dexter as our President, and has graciously accepted. Atherton led England in a record 54 Test matches, and batted in an era of fierce pace, unable to duck the bouncer because of a degenerative condition. He is without doubt the finest cricket writer since Cardus and Arlott, and a lot more accurate.

Ted was a non-playing President, while Mike has actually scored 50 at Stonor. So, we now have a President who’s actually played with us. Whereas our late President, when I met him recently, seemed a bit confused about a) what the V&A was b) his being President of our illustrious club and c) who I was. I think he assumed I was a waiter. Anyway, I was pleased to bring him the G&T he ordered. 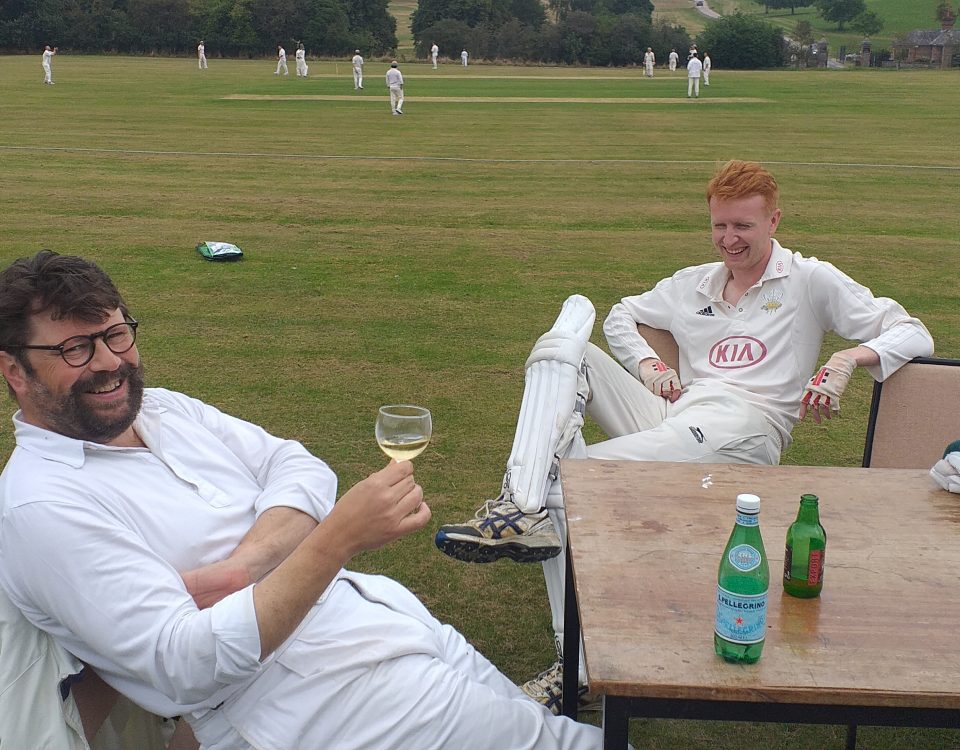