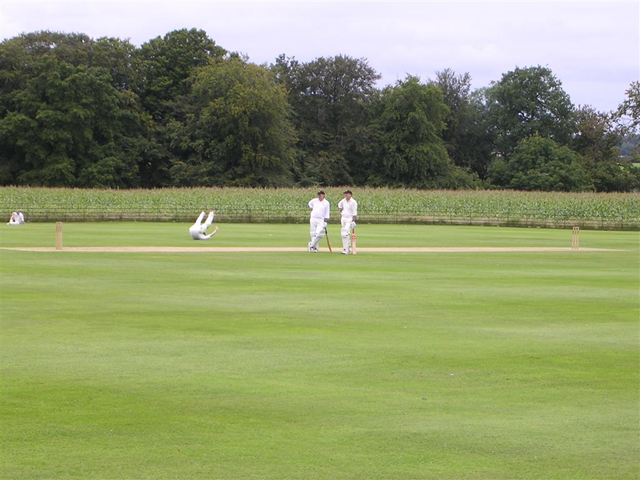 This fixture was played at Turville Park Cricket Club

The match v Turville Park was declared ‘on’ (around 9 am) by skipper Nick Derewlany, despite a dodgy forecast, because Turville had said we should play and etiquette thus demanded our presence. Adam Jacot, for one, looked at the sky, harumphed, reluctantly bolted his muesli, patted Emma and ‘sped’ down in his jalopy. He wished he hadn’t.

Tom Bird was catching salmon on the Tweed, Jonkers was busy reading a book, Andy Jones was probably in the recovery position. Lucky them. I now eschew strong drink but not out of choice. I do not recommend it. Memory is better; I am not quite so repetitive but these things are marginal.

Turville Park is where we used to play 40 years ago before moving to Stonor, for the better view and the cheaper pitch (only £25 then). There was a chestnut tree in the outfield, blown down in the 1987 hurricane, which would merit 5 runs if you hit it. Their Chairman and captain was Air Chief Marshal Sir Christopher Foxley-Norris, possibly the worst cricketer in the history of the game, but the most voluble. His banter in the outfield was perpetual and distracting to batsmen, which was probably intended. But he brought to the day the same carefree Jack Hawkins style that he showed during the Battle of Britain. Today’s Turville are young and rather virile, from what I saw of them. Serious cricketers. Their pitch is immaculate, credit to veteran groundsman John Hancock. But he will not allow play if it rains, unlike Stonor. Turville is clay, Stonor chalk, the latter drains, the former doesn’t.

They batted and Lachlan opened, venomously. I had to field as we were eleven with me. I transgressed immediately by forgetting to distance myself from the square leg umpire, so engrossed was I in my conversation.

We bowled a few overs. Adam Knight joined the attack, rather tightly. Ben Horan missed a catch off Lachlan (he is not fit). Lachlan bowled someone, I think, I was a bit engrossed in keeping my face mask straight.

Then it began raining. For some time we pretended it wasn’t. Then it rained heavily. So we fled to the pavilion, where a photo of Geoff Boycott graces the wall. The miserable curmudgeon turned out for a visiting advertising team (for money), made a ton so the rest couldn’t bat, refused to retire, and returned to the pavilion to scoff his and other peoples’ tea.

After watching the rain for a bit the Turville skip voted to abandon the match. Adam Jacot made a sort of ‘told you so’ gesture, and rued his rushed muesli. We chatted about the etiquette of match reports. Just how rude could you be about fellow cricketers? Christiaan had told Joe Tetley, who looked for advice, that you should ‘be gracious to the oppo, complimentary about the tea lady, but as offensive as you like about our players.’ Joe took him at his word. But can you include defects as a target for ribaldry? My lack of stature, Jacot’s inability to run, Emley’s psychological state, Sarah’s incompetence with pâté? I once referred to Jonkers as ‘not being built for speed’ which some thought a euphemism for ‘fat’. And I referred to Tom Bird’s ‘hoick to leg’ which some saw as a euphemism for ‘a bit useless’. Nothing could be further from the truth. These chaps are fleet of foot and technically superb. As I have often remarked, a prep schoolmaster in my youth advised that before making a comment to or about anyone ‘ask yourself a) is it true b) is it kind c) is it necessary’. A statement like ‘Chris Mounsey-Thear is a short bald drunkard’ fails this test because of b).

The master in question, a paedo and sadist, quite properly killed himself and nothing he said should be taken seriously. CP Scott of the Manchester Guardian famously wrote: ‘Comment is free, but facts are sacred.’ I would reverse it. Facts are irritants, comment is sacrosanct. But within reason. Jonkers once wrote of my behaviour towards a young barely-dressed woman at a Stonor quiz night that my behaviour had been ‘borderline inappropriate’. It was the use of the word ‘borderline’ I found so offensive.