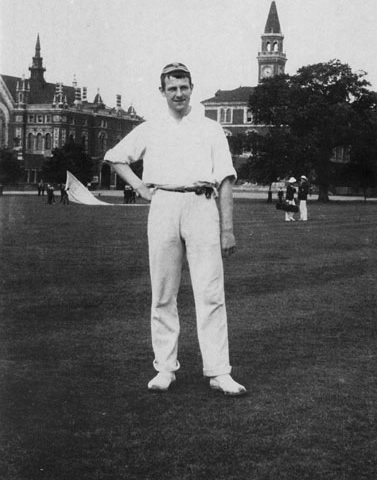 Cricket has offered literature a surprising amount of material over the years.  Jeeves was a Warwickshire medium pace bowler before lending his name to P.G.Wodehouse’s gentleman’s personal gentleman.  Sherlock Holmes is supposedly a portmanteau of Nottinghamshire and England wicketkeeper, Mordecai Sherwin and teammate Francis Shacklock, and Sherlock’s brother Mycroft named after the Derbyshire fast bowler, William Mycroft.  James Bond was an ornithologist, but the name of his arch-enemy, Blofeld, which Ian Fleming lifted from his club’s register, was the father of the commentator Henry Blofeld.  Both Wodehouse and Conan Doyle played cricket for the Authors XI in its original incarnation, long before it was brought out of hibernation in its current guise to play against poncey teams like the V&A.

The fixture is now in its fifth year and despite two rain affected matches, has been enjoyed by all concerned.  The Authors are a convivial bunch who, unlike the V&A, actually do what their team name suggests.  It was therefore rather surprising, with the match meandering for a draw, to see toys being violently projected from the pram of Authors batsman, Tim Beard. He had just received a ball from Lachlan which lifted sharply, struck him a painful blow amidships before rolling onto the stumps.  A bruise and a dismissal in the blink of an eye is enough to raise anyone’s ire and Beard took this out in the nearest thing to hand, demolishing the stumps with a swipe of his bat.  Had he only struck the ball so well during his innings, the Authors might have been closer to their target.  By now the poor chap was in a right state and rather than departing with the smidgeon of dignity he had left, he opted instead for a valedictory salvo of abuse calling us a bunch of wankers and tossers or similar, as well as a host of other unprintable names.  I thought this mainly fair comment however intemperately put, but such eruptions are likely to frighten the red kites for which the Stonor Valley has become famous, so cannot be encouraged on ecological grounds.

It was the most notable moment in an otherwise uneventful match.  Both teams were below strength, the Authors having spread themselves too thin by playing three matches in a week and the V&A by decrepitude and some shindig in Cornwall which robbed us of messers Constantine and Ayling.  The absenteeism made room for two new recruits, Joe Tetloe and Nick Derewlany, both chums of Andy Taylor, tempted out of the metropolis by Cath’s lunch and the Oxfordshire countryside.  They both proved to be handy cricketers and being young, could do things like run and bend and throw, distant memories for most of us.  In stark contrast, Emley, who was due to captain, had a pulled Achilles, so marshalled the troops from the safety of a deckchair on the sidelines.  Of those who did play, Enzo limped off after three overs, Martin after one and I should probably not have bowled at all.

The V&A batted first opening with Poynter and Tetlow.  I once described Jago’s batting as adventurous in the same way that Nigel Farage is mildly distrusting of foreigners.  Pleasingly, the intervening years have seen Jago’s batting mature rather more than Farage’s politics.  He now bats with care, but not without panache.  One on-drive in particular, bisecting the bowler’s stumps and mid-on on its way to the boundary, was a thing of beauty.  When he was given out lbw, sweeping Will Fiennes, for 40 the score was on 90 off 14 overs.  Tetloe and Taylor continued in the same vein before the latter was run out for 31 and the former deceived by that most devilish of deliveries, the second bounce yorker to be bowled for 67.  Lunch, a fine spread of cold meats, slaws and salads, was taken with the score on 166-3 from 24 overs.

The Authors captain, Charlie Campbell, is the only person I have yet played against who is more obsessive about cricket balls than I am. The new one had been deposited into the long grass by about the tenth over and no amount of search parties and sniffer dogs could locate it.  Charlie keeps a stock of appropriately aged balls for such eventualities, but one by one these disappeared hither and yon leaving him tearing his hair out at the diminution of his stock.  It is, alas, an occupational hazard of playing at Stonor and one of the reasons for only playing 35 overs a side is because of the time spent looking for the ball in the undergrowth.

More balls were lost after lunch as Rob Taylor (35*) and Nick Derewlany (49*) batted purposefully against tiring and increasingly demoralised bowling to put on 83 from nine overs before we declared early, setting the Authors 250 to win off 37 overs.

It was a stiff target, but the format of the game allowed for a draw so the challenge was always going to be winkling out ten wickets.  Stonor has not been the happiest of hunting grounds for Tony McGowan and things were going from bad to worse for him when he miss-hooked the first ball of the innings straight up in the air.  He was on his way back to the pavilion as ball looped into bowler’s hands, but at the crucial moment, Lachlan found he had ten thumbs and McGowan was reprieved.  Lachlan and Enzo both bowled with control and no little venom, both beating the bat regularly and Lachlan conceding but three runs in a five over spell.  However careful application and a dose of good fortune saw the openers through and with some help from Rob Taylor (four overs for 33) and two extraordinary overs from Tetloe, which challenged both wicket keeper and third man, but not the cut portion of the pitch, the Authors took tea at 91-0 from 19 overs and both sides wondering if they could manufacture a positive result.

Shortly after tea, McGowan fell to a fine catch at cover by Tetloe from the bowling of Derewlany who also had Owen lbw a coupe of overs later, and the door looked ajar.  However, we reckoned without George Morton-Jack, who made an elegant 54*, including a couple of crisp cover drives and Ned Fiennes who looked composed in the light of some fiery bowling from Lachlan to finish 23*.  Nine bowlers were used to in an attempt conjure a wicket, but all to no avail.

That a wicket which looked quite sporting had yielded some 470 runs for just six wickets, owed as much to inept bowling on both sides as it did to the high standard of batting.  After the match Nick P-G tidied up the pavilion.  I volunteered my services, but was told to go away; apparently only Adam Jacot is a reliable helper in these circumstances.  So I went to the pub instead, where I learned about the futility of literary prizes and how to write a TV quiz show.

V&A vs The Unabombers 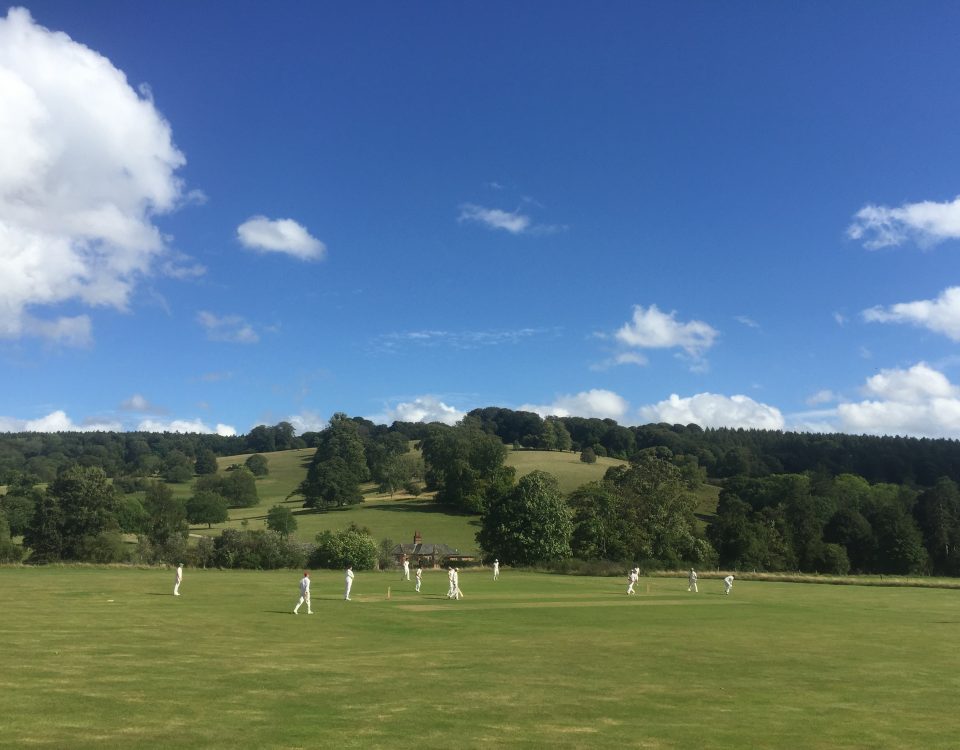 V&A vs The Butlers XI