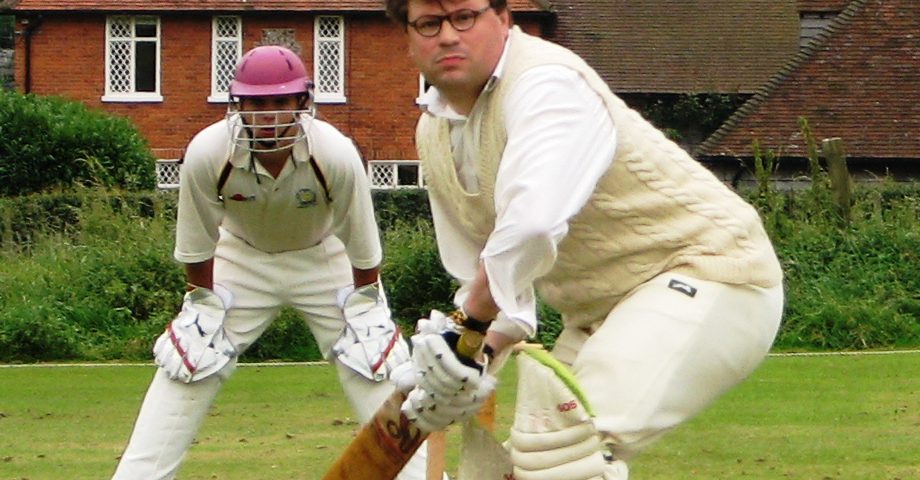 The V&A moved to Stonor from Turville Park about 35 years ago. The Stonor ‘pavilion’ was then a shack, with walls but not even a window. Only a flap on hinges. No water. The lavatory was a bush. Today is luxury in comparison. We played Stonor village when Tony Fisher, Grumpy Groundsman emeritus, graced their team and bowled classy offies. We have all passed a lot of water since. The V&A team that played Stonor in 1989 n’existe plus, apart from Martin and me; they are dead, or living in Eastbourne which is much the same. One or two were banged up. A young all-rounder called Adam Jacot joined just afterwards, and elevated the tone both on and off the field with his virility and erudition. The erudition remains.

I did not actually play against Stonor this year, but they also serve who only umpire and scoff tea. Stonor are a bit good these days and, thankfully, free of the two curmudgeons who spoilt many an afternoon by their rudeness. They were sacked. We once had a total wanker play with us and try as I might I couldn’t get rid of him. I lack moral courage. It took Rupert Morris to wield the axe. He is blunt. Probably from Yorkshire. He sent the wanker a letter. ‘You are too old,’ he wrote. The wanker replied: ‘Nicky Bird is older than me.’ Rupert wrote back, ‘We can’t get rid of Nicky but we can get rid of you. Fuck off.’ Or words to that effect, but more forceful.

We batted first in a timed game. It started badly. Andy Taylor was bowled first ball. He was still suffering from his stag do in Latvia, and the horrors of a grannygram and Riga Black Balsam (alc. 100% vol). Then further disaster. Ross caught behind (for 8, after two nice boundaries), Lachlan (1) caught at cover, Christiaan (2) caught at mid-on. Rob Taylor (11) smacked a few but was bowled by Sy; Ben Horan ((2) and Rupert Morris (0) both succumbed to bowling that was not exactly ferocious. Only Tom Bird (15 – with 3 fours) and the run machine that is Vin Grantham (28 – 5 fours) held out. Vin has, I regret, consulted his solicitor about my calling him a fat drunk but apparently truth is an absolute defence so he hasn’t a leg…

And who caused the damage (3 for 12, two wicket maidens) and claimed Tom and Vin’s wickets? The turncoat that is Tom P-G, now playing for Stonor!

We were 79 for 9. The late post-lunch start had perhaps disrupted our routine, forcing V&A athletes to bolt the Gewürztraminer. Mark, Stonor’s gentlemanly skipper, then put on some benign bowling and Martin Bowden and Norman Reid made a last wicket stand of 50 to reach a respectable(ish) total of 129. I cannot recall such a collapse of so many potential centurions. Martin (22*) and Norman (16) had done what earlier batsmen had failed to do, bat with discipline and restraint and only hit the loose one.

But the sun shone and Stonor are always agreeable. So was tea, courtesy of Cornelius Kavanagh (father of Ollie who plays for the Refreshers).

During the week before the Stonor game we enjoyed a spirited debate via email. How fast was Tyson? Was Larwood’s bowling on the Bodyline Tour more dangerous than Archer’s? Or Lachlan’s. My father knew D.R. Jardine (fellow Wykehamist), the captain on the Bodyline Tour. When in India (as Lord Wavell’s ADC) my father introduced Field Marshal Wavell (another Wykehamist) to Douglas. But Jardine was so drunk all he could do was gurgle. How many of us have let ourselves down at these crucial moments? At the V&A I met the Queen when inebriated (me not her) and Princess Margaret when inebriated (me andher). I hope when I eventually go to bed with Helena Bonham-Carter I do not let myself down, but at my age you can’t be sure.

We opened our bowling with Lachlan and Andy T. Lachlan picked off their opening batsman (caught at third slip by Rob T) after a mild brouhaha when the batsman felt that Lachlan was bowling dangerously short, and indicated as such. Amends were quickly made and the length adjusted, and his wicket fell. Christiaan picked up the wicket of the other opener. But Stonor reached 90 comfortably and the total looked within easy reach. But wait! A flurry of wickets! Suddenly they were 95 for 5. Could this be Headingly 1981? Did we have a Bob Willis to finish them off?

No. They reached our total with wickets and time to spare.

But, as Martin said, we had fielded a full team against our hosts, and lost with grace, which was the diplomatic thing to do. Years ago, when I was in the US, I put out a V&A team to play Stonor in absentia that was substandard. I was reduced to dragging in some riffraff from the wrong end of the National Theatre, make-up artists and the like. I got a letter from Stonor complaining about the discourtesy of fielding a side of deadbeats and queens. So the next year I had a side packed with the likes of Vib Fonseka and his mates, superlative Sri Lankans. I got a letter complaining about the discourtesy of fielding county standard players. You can’t win.

We went to the Rainbow after the game where Curly, Oxfordshire’s grumpiest landlord, and Jean were still pulling pints and bickering. We used to go there for ten years but left when little Johnny Wright trampled all over Curly’s garden and Andy Fraser let himself down with Mine Hostess.

The timing of Stokesy’s innings was perfect, and tea was extended while the last dramatic overs were broadcast on the ancient Stonor crystal set. Once again, I backed the wrong team with Paddy Power. I have got all the big calls wrong. I bet on Hillary Clinton, Remain, Leicester for the drop (when they were champions). I had a sneaky suspicion that Eddie the Eagle would win Olympic gold. I was not wholly right.