One of my earliest memories of playing in a cricket match was my school’s Parents v School game. The master in charge of cricket was a rotund German with a gammy leg, who for reasons I cannot being to imagine had taken up cricket as a way of blending in with the locals.  He was also somewhat forthright in his views, so when my mother mentioned how much I was enjoying playing, he replied by describing me as the most ill-coordinated boy he had encountered and a lost cause as far as cricket was concerned.  Usually the School, after season of nets and matches, beat the less practiced Parents quite easily, but on this occasion a recent addition to the Parent ranks happened a regular for Worcestershire II’s. He hit sixes at will and when he tired of that, offered a series of towering catches which a succession of hapless schoolboys proceeded to drop.  It was only when he was eventually out, we discovered he was really a bowler.

The V&A played host to its own Dads v Lads match this week.  No fewer than six of Tom Pritchard Gordon’s Silk Boudoir XI were sired by members of the V&A team: the aforementioned Pritchard Gordon, two Simpsons and three Granthams.  The V&A for their part were somewhat weakened by the loss of Emley and Marsh during the week and the discovery on Friday afternoon that Nieboer had found something better to do.  It also quickly became apparent that the youngsters of the Silk Boudoir could run and bend and throw with comparative ease, whilst the running between the wickets of Grantham and Pritchard Gordon pères was a little less sprightly.  After a not particularly quick two, I feared we might need to call for oxygen to revive the wheezing Grantham.  The Silk Boudoir’s opening bowlers, Theo Gratham and Vardy were both tight and threatening, the latter bowling Nick P-G with just the sort of ball he dislikes (a straight one) and with ten overs gone the rate was little more than two an over.  This distressed Nicky Bird, nominally captain but in effect just here to cause trouble.  In discussing the play, I referred, quietly and confidentially, to one of the opposition as corpulent, merely by means of identification.  “Corpulent, you say!  By which you mean fat.”, retorts Bird loudly.  I happened to agree that Roget, were he there to be consulted, might have put have the two words side by side in his book, at which point Bird makes it his day’s work to make sure everyone at Stonor, not to mention the surrounding villages and a good proportion of South Oxfordshire, is aware that I described this poor fellow (who happened to be quite a handy cricketer) as fat.  More unfortunate still was that sitting next to us, just the Bird propaganda machine was whirling into action, was said fellow’s girlfriend, who was too polite to start talking about pots and kettles, but did look daggers at me for the rest of the day.

Meanwhile, Vin had found his touch and aided first by Sethi, before he was well caught by Theo Grantham off the bowling of Tom P-G, and Wayland, the score moved along apace.  During the period, the Silk Boudoir, possibly suffering the excesses of the night before, went from sharp to crapulent, dropping and fumbling everything that came to them.  The V&A lunched at 108-3 from 27 overs.

Much has been made of my catering arrangement with Nick Constantine and who gets the best of deal.  The fact is that is it one of those symbiotic relationships of mutual benefit.  On this occasion Constatine surpassed himself with a whole chicken, sautéed potatoes and a vorpal aioli.  There was some talk of personal pronouns.  Apparently, you are allowed to choose nowadays, but not if you are a cricketer.  The commercial digital platform, Cricinfo has decided that you can no longer be a batsman in its articles, you must be a batter, believing the change to address subliminal gender bias in cricket.  Ignoring the fact that batter is something you fry fish in, it brings into question a number of other cricketing terms:  third man is straight out on the same grounds, but by extension should short leg be avoided lest it offend dwarfs or square leg might in case it riled the disabled?  Silly mid-off could make the simple-minded feel uncomfortable and cover could be deemed to be restricting your freedom of expression if you were a nudist.   It has all the appearances of a slippery slope paved with good intentions.

After lunch, Nick Constantine set about the bowling with the elan of a man in possession of a new bat intent on getting his money’s worth.  He raced to 41 with four fours and one mighty six, before getting over-excited and racing past a ball from Top P-G to get stumped.  A couple of well-deserved late wickets for Theo Grantham and some lusty blows from Tetlow and self, allowed Constantine to declare the V&A innings on 172-6 from 36 overs.  Under the agreed rules, this gave the Silk Boudoir 34 overs to knock off the runs or hold out for a draw if the V&A couldn’t claim ten wickets.

The Silk Boudoir got off to a lively start with a couple of well struck boundaries from Henry Grantham, but Tetlow struck a length and the stumps, three times in quick succession and TPG’s men soon found themselves at 26-4.  Joe Tetlow is something of a curate’s egg when it comes to bowling.  He has whippy, repeatable action, capable of generating a fair pace, but there are times when he struggles to locate the cut portion of the pitch.  He bowled a never ending over a couple of years ago which tested third man with no prospect of any intervention from either batsman or wicketkeeper, but on this occasion the moving parts were in good working order.  Woodbridge and Jay set about rebuilding the innings.  Sethi bowled tightly with no luck at all.  He had Woodbridge dropped at mid-on and then induced a clear outside edge from the bat of Jay to the wicketkeeper, only for that batsman to decide he didn’t fancy leaving the crease quite yet.  The umpire who perhaps found himself in that post for the first time, looked slightly embarrassed but did nothing, much to everybody’s bemusement.  The refusal to walk, blessedly infrequent in this type of cricket, is so distasteful as to make someone with the future of the race at heart despair.  In the context of the match, it made little difference.  Shortly after the incident, the batsmen were taken in by Adam Jacot’s carefully cultivated demeanour of decrepitude and sought to take a second run on a Jacot fumble.  In a flash, he recovered, swooped and flung the ball into the bowler who affected a simple run out.

Woodbridge was now batting capably and intelligently, striking boundaries when the field was up and running hard for ones and twos when the field was back.  However, as partners came and went at the other end, if he was to affect a remarkable victory it looked as if he must do it on his own.   Ed Grantham was caught by his father off a loopy ball from Hale and whilst Theo provided some support either side of tea, when he went, quickly followed by Woodbridge for a well-constructed 58 it was down to whether the final pair of Tom P-G and Dario Simpson, previously enfants terrible of the V&A, could frustrate their erstwhile team and hold out for a draw.  It was not to be.  Tom P-G played back to one which kept a bit low from Tetlow and was struck on the pads in front of the stumps and Ed Grantham to his great credit raised the fatal finger, with the Silk Boudoir still 19 short of their target.

Next week sees a return of the inter-V&A game.  The last such fixture, two years ago, gave us a tight finish and lasting acrimony.  I wait with interest to see if history repeats itself. 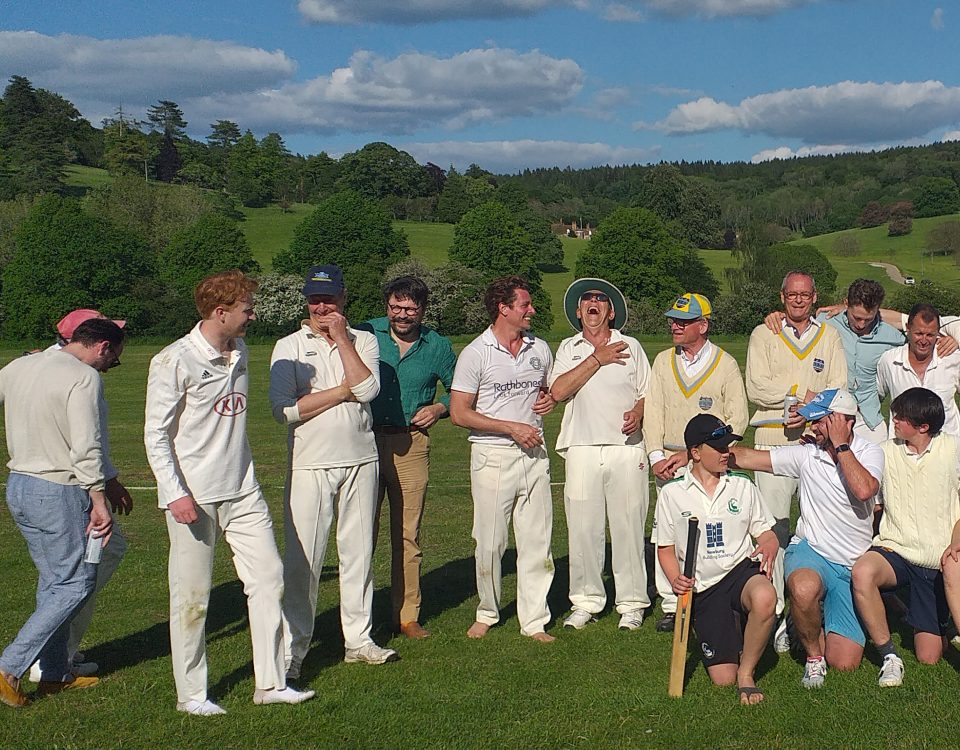 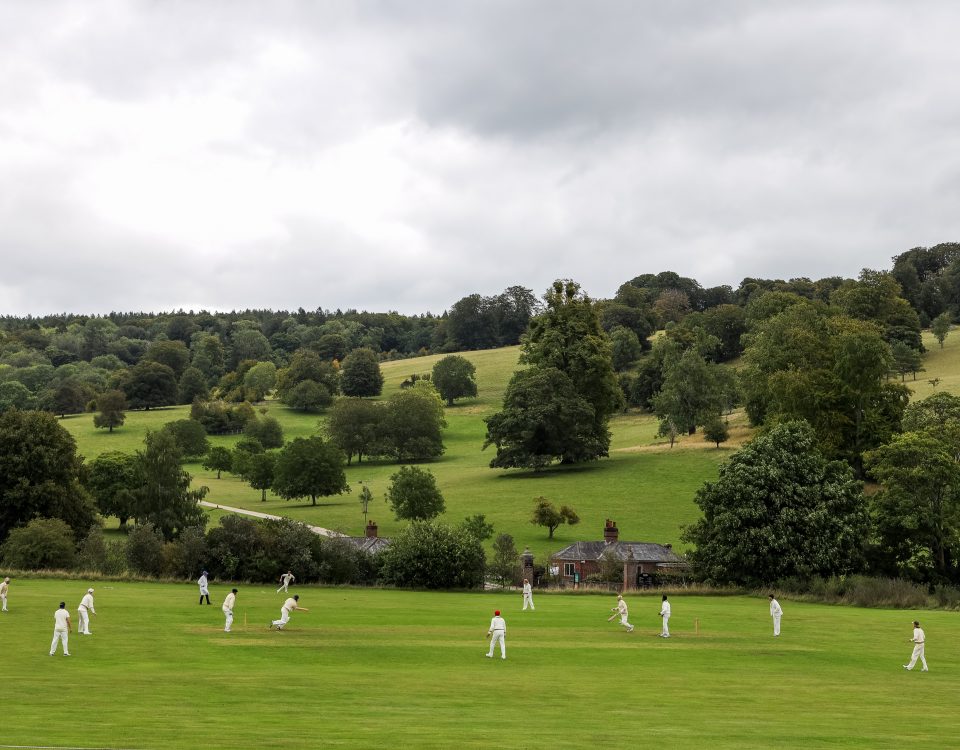